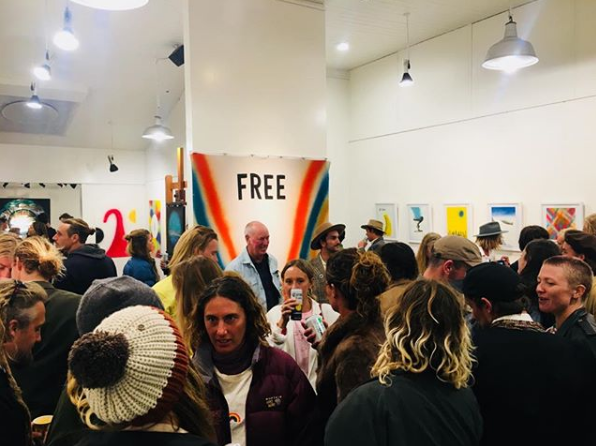 LESTRANGE Galleries current exhibition is its annual group show. In its sixth consecutive year, it has become a highly anticipated event on the Canterbury art calendar. Rarely does such a saturation of talent and artistic prestige come together in one show outside of a major city centre. Many of the artists features have produced multiple works now housed in the permanent collections of public galleries. LEstrange puts it well when he describes some of them 'These are the guys we used to read about in art books at school'.

Alan Pearson's subjective abstractions, forms described in large confident brush strokes. There are works by Ewan McDougall with their garishly painted but playful figures. Strangely animated, they seem to dance across the canvas. The politically charged paintings of Nigel Brown are sure to spark up many a discussion. 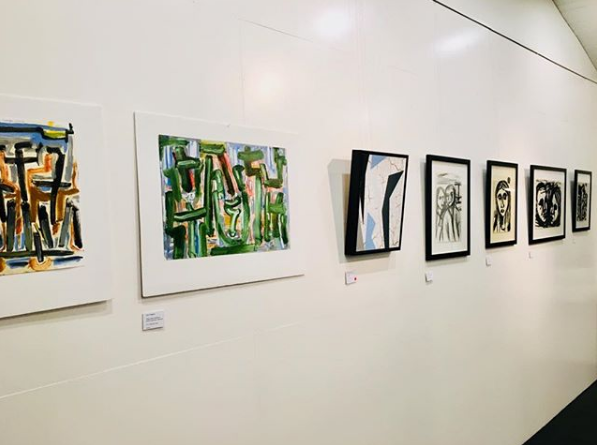 The Jeffrey Harris pictures of hollow-eyed faces, drawn and painted devoid of colour in black media against a raw white paper background lend a sombre, almost haunting mood to the space they occupy.

The sculptural wooden works of Roger Hickson evoke a familiar yet elusive nostalgia via a sense of place - of a specific location - known only to each individual viewer. While the locations depicted n Hamish Allen's paintings draw us back through our own memories to scenes bathed in the bright glow of the New Zealand sun, labour intensive brush work producing naturalistic forms of excruciating beauty.

Prints by Tony DeLautour cause the viewer to move ever closer to them, their intricate details demanding to be read and scrutinised, rather than merely looked at. 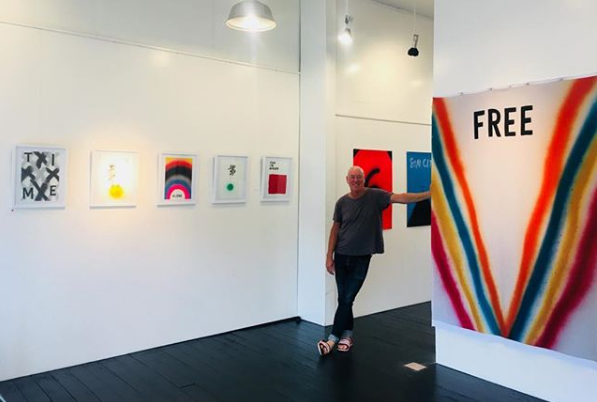 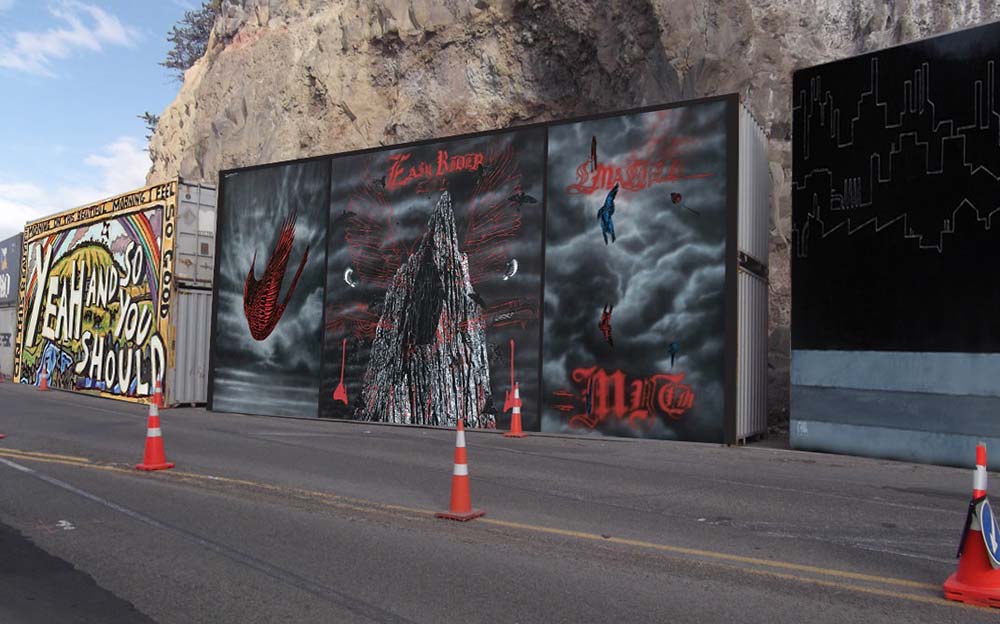 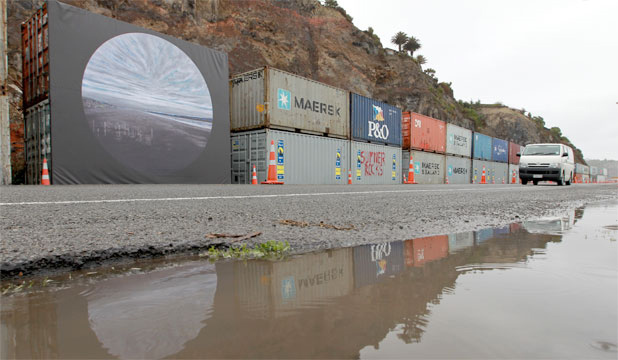 Shipping containers acting as quake barriers are being transformed into an open-air art gallery.

The wall of shipping containers was an excellent exhibition space for artists, said L'Estrange. "This is very much about the community turning a negative into a positive," he said. "It is a fantastic platform for artists to show their work when the galleries are closed. The containers are a real symbol of the period after the earthquake."They have changed the urban landscape. They are so ugly and will be around for up to five years, so we wanted to create something special that people will travel to see. Sumner has been hit really hard."

To put in context: Sumner has long been loved by Christchurch residents and visitors alike - it has a seaside village feel that is quite delightful. One of the reasons it’s hung onto its village atmosphere is the fact that it's removed from the city a little with just one road for access. The Canterbury quakes shook the cliffs up quite a bit and while extensive geo-tech work has been undertaken to remove any potentially dangerous rocks, as an additional precaution shipping containers have been placed below the cliffs beside the road as a safety buffer from any rebel rocks falling. 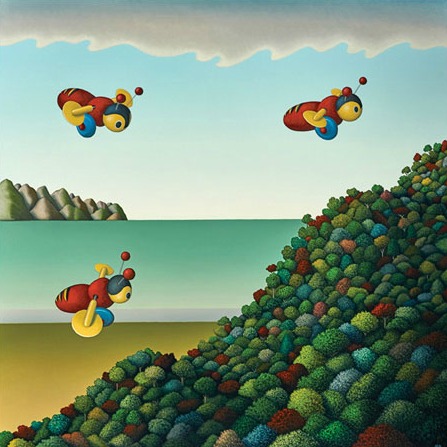 Hamish Allan's solo show Decipher asked the visitor to identify, interpret and find meaning in the "visual signals" included in the works. 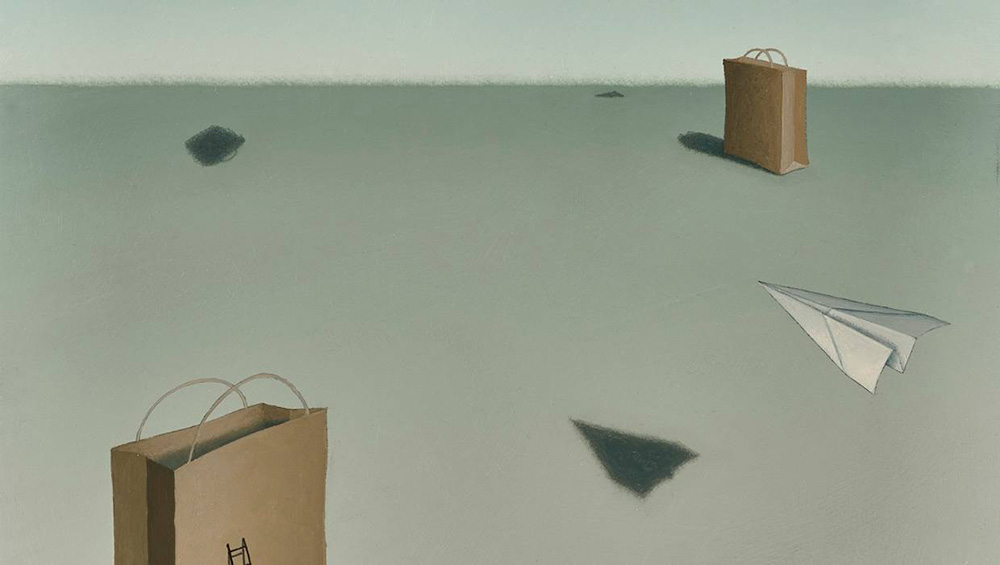 Allan's vast landscapes, in which anything could appear, invoke a memory of Salvador Dali and his fellow surrealists - without quite trnscending into the true dreamlike weirdness that typified a Dali painting.

Allan's work also includes frequent Kiwiana references - from the buzzy bee to native flora and fauna, there is no doubt of the artists origins when looking at his paintings.